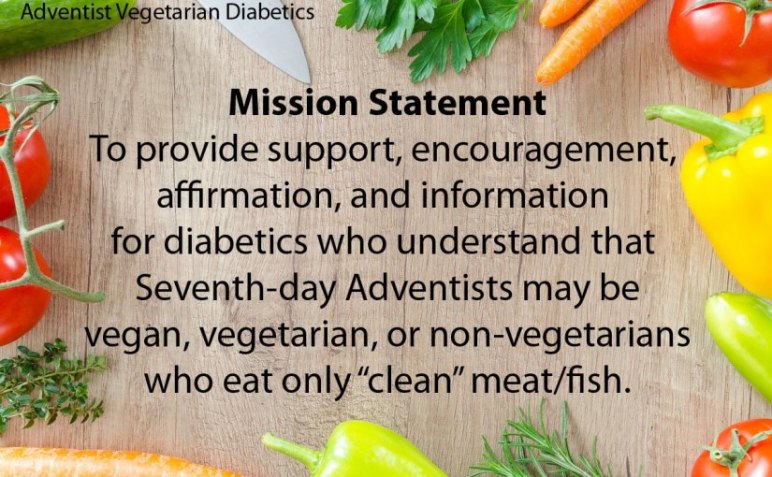 When Adventist Vegetarian Diabetics™ began as a Facebook group in 2013, it consisted of 30 or so of my Adventist friends who I knew were diabetic. I chose to call the group vegetarian, although I knew that some were non-vegetarians who ate only “clean” meat/fish.

I wanted a group that shared recipes that were lacto-ovo vegetarian and non-vegetarian that excluded “unclean” food per the definitions in Leviticus and Deuteronomy.

So I based the group on this Mission Statement:

It never occurred to me that someone who is not an Adventist would join this group until a young woman from Australia joined. She was in the group several months until one day she said, “Oh, I thought the group name was Adventurous Vegetarian Diabetics!”

I didn’t see any reason why a non-Adventist couldn’t join the group as long as they understand that Adventists typically do not eat Biblically “unclean” food.

I also discovered there were others in the group who were just trying to prevent diabetes through an appropriate dietary protocol or who had a family member or close friend with diabetes. Some had another metabolic syndrome, such as PCOS. And some were, by their own admission, just here for the recipes!

Admittedly, my focus was almost exclusively on the low-carb dietary approach because that was what was working for me. Until a few less-than-pleasant interactions with several group members taught me that I really needed to expand my horizons and accept:

By this time, though, Adventist Vegetarian Diabetics™ had become our branding and I didn’t want that name to change.

The most recent lack of communication instances have been members who join expecting the group to be exclusively vegetarian or vegan. This is the reason I decided we should change the wording of the Mission Statement as follows:

To provide support, encouragement, affirmation, and information for diabetics who understand that Seventh-day Adventists may be vegan, vegetarian, or non-vegetarians who eat only “clean” meat/fish.

People who request to join the private Facebook group must answer 3 questions:

Once a member is added to the group, they will undoubtedly see firsthand what an Adventist lifestyle looks like. They will see an inclusive group that accepts all who feel a need to be in our group for the purpose of preventing, controlling, or reversing diabetes through lifestyle interventions. They will see—and become a part of—a safe, welcoming family.

If you are not a member of the Facebook group, Adventist Vegetarian Diabetics™, and would like to be, you can start here.

Hope to see you again soon!

The contents of this website, such as text, graphics, images, and other material contained here (the “Content”) are for informational purposes only. The Content is not intended to be a substitute for professional medical advice, diagnosis, or treatment. The Content is not suitable for self-administration without regular monitoring by a qualified medical doctor in a supervised program. Always seek the advice of your physician or other qualified health provider with any questions you may have regarding a medical condition. Never disregard professional medical advice or delay in seeking it because of something you have read in our Content.

Printing and Sharing on Social Media

About External Hyperlinks on This Site

It has recently come to our attention that website owners are being penalized by Google for being listed in directories and sites that contain links to them, especially sites that collect and organize links to sites on specific topics. This is very distressing to us because that has been the whole purpose for the existence of this Adventist Vegetarian Diabetics blog, to have pages with lists of resources that you can find on the internet! This includes products as well as recipes and articles on many topics that are of interest to Adventist Vegetarian Diabetics. However, if you are one of these website owners who is being threatened by Google to lose your SEO ranking because we have listed a link to your site on Adventist Vegetarian Diabetics, please contact us (using the mail form) and we will remove your link. We will leave only the name of your website and let our readers know they will have to do a search for you on the internet. We will recommend that they use Bing or Yahoo.

If you should happen to find broken links, please contact me via email (use the Contact Us form). Thank you!