I am always challenged whenever a new member who joins the group has an unusual or unique situation. Such was the case with Madhusoodanan, a 74-year-old man from India. Those of you who were in the group in September may remember reading his post. He reported that he had become a Type 1 diabetic six years ago after a pancreatic surgery removing his duct due to a tumor, fortunately benign. He describes himself as an “eggetarian,” sometimes called ovo-vegetarian (eats eggs but not dairy). He stated, “Our food pattern is loaded with carbs. I am quite active and in good health. I am trying to get to details of a vegetarian diet [with] 60-100 grams of carb. Dr Bernstein’s book [Dr. Bernstein’s Diabetes Solution: The Complete Guide to Achieving Normal Blood Sugars] has been of immense help in understanding more about diabetes. Looking out basically for info on diets. Since I am prone to develop kidney stones, soy products take a very low preference in my diet.” He was looking for appropriate recipes and menu plans.

My first thought was that a paleo vegetarian diet might be what Madhusoodanan needs. Unlike the traditional paleo approach, which allows meat, eggs, fruits, and vegetables, but not dairy, grains, and legumes, vegetarian paleo would eliminate all flesh foods and dairy (as well as grains and legumes). Because Madhusoodanan’s goal is 60-100 grams of carb per day, he could probably handle a judicious amount of fruit. And, being a Type 1 diabetic, he would work with his medical care provider to help him adjust his insulin dosage based on his insulin requirements. 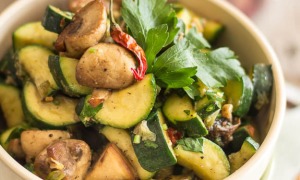 The first source I found is this collection of vegetarian paleo recipes. I found that some of the links to recipes are “broken” so I would advise doing a Google search on those recipe titles. Be sure to include “low-carb” and “paleo” in your search criteria.

Next, I did a search on Amazon and the link below shows the results.

Paleo for Vegetarians on Amazon.com
http://amzn.to/1MCUSLN

Finally, here are the results of a Google search on “vegetarian paleo diet” as of 9/27/15. It is presented here exactly as it appeared on Google that day.

Paleo for Vegetarians? | Paleo Leap
paleoleap.com/paleo-for-vegetarians/
The Paleo focus on meat and animal products as the core of a healthy diet isn’t very vegetarian-friendly. But after learning about the great health benefits their …

Can Vegetarians Go Paleo? – Huffington Post
http://www.huffingtonpost.com/2014/08/28/vegetarian-paleo-diet-possible-or-not_n_5723170.html
The Huffington Post
Aug 28, 2014 – Bacon, steak and more bacon is often associated with the much-hyped Paleo Diet, which is undoubtedly having a moment. Can vegetarians …

Can You Do Paleo Without Eating Meat? | Healthy Eating …
healthyeating.sfgate.com › Healthy Meals › Eating Out
Eat a wide variety of plant-based foods on a vegetarian Paleo plan. The Paleo diet is based on the way humans used to eat thousands of years ago. It is often …

What’s the Best Diet? Raw, Vegan, Vegetarian, or Paleo …
breakingmuscle.com/…/whats-the-best-diet-raw-vegan-vegetarian-or-paleo
The following is a guest post from Heidi George of The Chocolate Puma: Over the past 15 years, I have experimented with food in many different ways.

This site uses Akismet to reduce spam. Learn how your comment data is processed.

The contents of this website, such as text, graphics, images, and other material contained here (the “Content”) are for informational purposes only. The Content is not intended to be a substitute for professional medical advice, diagnosis, or treatment. The Content is not suitable for self-administration without regular monitoring by a qualified medical doctor in a supervised program. Always seek the advice of your physician or other qualified health provider with any questions you may have regarding a medical condition. Never disregard professional medical advice or delay in seeking it because of something you have read in our Content.

Printing and Sharing on Social Media

About External Hyperlinks on This Site

It has recently come to our attention that website owners are being penalized by Google for being listed in directories and sites that contain links to them, especially sites that collect and organize links to sites on specific topics. This is very distressing to us because that has been the whole purpose for the existence of this Adventist Vegetarian Diabetics blog, to have pages with lists of resources that you can find on the internet! This includes products as well as recipes and articles on many topics that are of interest to Adventist Vegetarian Diabetics. However, if you are one of these website owners who is being threatened by Google to lose your SEO ranking because we have listed a link to your site on Adventist Vegetarian Diabetics, please contact us (using the mail form) and we will remove your link. We will leave only the name of your website and let our readers know they will have to do a search for you on the internet. We will recommend that they use Bing or Yahoo.

If you should happen to find broken links, please contact me via email (use the Contact Us form). Thank you!